Black cats and witches go hand in paw in popular culture but the origins of the witches' familiar aren't so black and white. Where did the connection between witches and cats stem from, why did it begin, and how did it perpetuate? Cats were not maligned in ancient times; we all know the Egyptians worshiped them so what happened? This post explores the shift in popularity that took place in sixteenth-century Britain and looks at some of the strange beliefs associated with cats during the witch trials of this century and the next. Cats - From the monk’s companion, to the Devil himself.

In Europe in the Middle Ages, cats were kept to protect grain stores by keeping the rodent population down. They were so highly valued for their rat- catching skills that an adult cat would fetch the same price as a full-grown sheep, goat or untrained house dog. A kitten was deemed the same value as a piglet or lamb.

Cats were also the only animals to be allowed in monasteries for the same purpose. Religious manuscripts often feature cats chasing or eating mice and it’s likely cats were considered welcome companions for the monks. 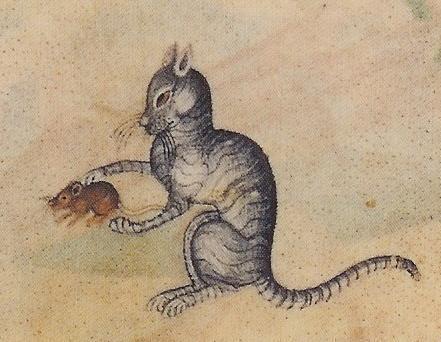 Cat and Mouse from the Luttrell Psalter (British Library)

However, with the advent of the 16th Century Witch Craze, cats fell out of favour and became connected with the antithesis of religion; as pagan symbol, associated with sorcery, magic and witches. Cats were feared and thought to indicate the presence of evil, either being the Devil himself, or a witch in disguise.

The first allusion to a cat having nine lives appeared in a book called Beware of the Cat in 1584, where nine was the number of times a witch could take on feline shape. It was even believed that witches had a third nipple reserved especially for suckling their evil cat companion.

Witches and their familiars

Sathan and the famous witch trial of 1566

The first widely documented witchcraft trial was that of Elizabeth Francis, Agnes Waterhouse and her daughter, Joan. It was said that Elizabeth’s Grandmother had given her a cat named Sathan (a vague allusion to Satan) whom Elizabeth carried around in a basket; fed on bread, milk and her own blood whilst practising the black arts. Apparently Sathan was responsible for the death of Andrew Byles who had made Elizabeth pregnant but refused to marry her. Fifteen years later, Sathan was passed on to Elizabeth's sister,  Agnes Waterhouse, whereupon he apparently continued his evil bidding, causing the death of many geese and cows in the area.

There were numerous trials involving Elizabeth Francis and her family, with Sathan always featuring as the scapegoat for various misfortunes and deaths within their township and the local area and sensationalised stories of witches spread throughout Britain, further damaging feline reputations.

It played out very differently for each of these women accused. Elizabeth's detailed accounts and confessions in the trials ended up saving her from persecution. She instead becomes an authority on the subject and even served as a court recognised witch-hunter! Her sister Agnes, was not so lucky and was executed in July 1566 - her daughter Joan was acquitted.

Isn't it lucky we can openly celebrate black cats this Halloween without fear of execution!

Sources: “The Secret Lore of the Cat” by Fred Gettings, “The Cult of the Cat” Nicholas J Sanders, “Cat Sense” John Bradshaw, “The British Museum Book of Cats” Juliet Clutton-Brock.